The Karamoja region of northeast Uganda has a long history of violent conflict and under-development. Since 2011 the region has entered a period of relative peace and stability, and is now receiving a wide range of government and aid programs, with involvement from multiple international aid donors and NGOs. But what is working and why? Which approaches need reshaping? What can be scaled up, and where is the evidence to support this?

The Karamoja region of Uganda has unique development challenges, including low rainfall with risk of environmental degradation, food insecurity, and cross-border conflicts. Over 60 percent of the Karamojong population live below the Ugandan poverty line, compared to the national average of 27 percent. Recognizing this, the Government of Uganda created the Ministry for Karamoja Affairs (MfKA). Despite progress, there remains a need for improved coordination between the MfKA, the Government of Uganda, and the Karamoja Development Partners’ Group (KDPG), the primary vehicle for stakeholder collaboration in Karamoja.

The first Karamoja Resilience Support Unit (KRSU) was implemented by Tufts University, which provided assessments, studies, and analysis of development programs in Karamoja. KRSU II is mainly implemented by Tufts University as the key sub-awardee. It will build on its predecessor’s success and define new development priorities, develop implementation plans, and success indicators for the future.

The project focuses on knowledge management and coordination between donors, multilaterals, Government of Uganda, partners, and other stakeholders in USAID/Uganda Mission’s resilience zone of Karamoja, with the aim of strengthening the resilience of communities in Karamoja. The project provides targeted support to strengthen government policies and systems that build resilience in Karamoja, and assists the MfKA in coordination and in managing their own M&E and learning systems. KRSU II will facilitate coordination of GOU and development and humanitarian partners. This includes both networking support for Karamoja-based agencies and staff and identifying areas for collective action or actively supporting collaborations.

DROUGHT RISK MANAGEMENT IN KARAMOJA: A REVIEW OF FUNCTIONALITY AND CAPACITY 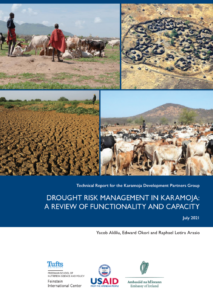